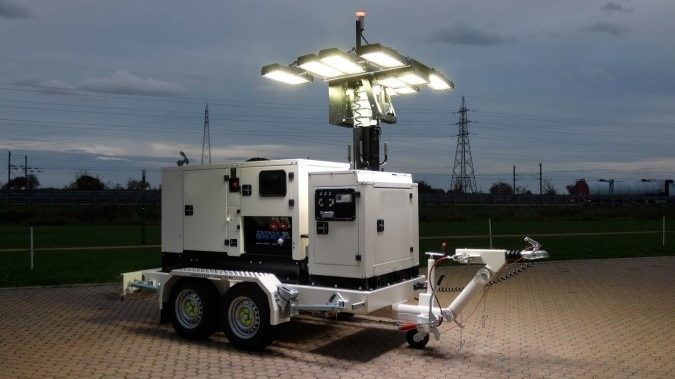 Bruno has manufactured a lighting tower that responds to customized requests of the Frankfurt International Airport, one of the largest airports in the world.

This lighting tower is composed of an Enermax-type generating set coupled to a compact version of the LED Box Light, specifically designed to be trailer-mounted.

In addition to powering the lighting tower, the generating set is equipped with a distribution board with single-phase and three-phase outputs, for a total power to be supplied to other equipment up to 25kVA.

These two units are linked through a connector, so that they still remain distinct and separate, facilitating inspection and maintenance operations.

Furthermore, a switch on the filler neck will activate the fuel level gauge by simply opening the fuel flap even when the machine is off, to allow visualization of the fuel level during the refilling operations and prevent fuel spillages. The filler neck is placed externally under a flap, to ensure different levels of access of operators, suppliers and maintenance personnel.

On the panel of the light tower there is a connector that allows the connection of a remote control of the tilt, of the right and left lights, as well as the starting of the engine. This function was specifically added on the customer’s requests.

On the top of the castle an adjustable brightness sensor manages the automatic switching on and off of the lights, based on the level of ambient light – even when the engine is off.

The tilt of the LED light tower is electrically adjustable and the head of the headlights can tilt up to 90° from the horizontal plane. Moreover, each individual lamp can be independently directed. The lighting can also work with an external auxiliary power supply via an input plug.

The hydraulic lifting system uses a vegetable oil so that any possible leak will pose no risk to the environment. An additional battery was installed in the shaft compartment to supply the hydraulic power unit, so as not to overload the engine starter battery. The batteries have both a double battery isolator switch, allowing to isolate both the negative and the positive pole. This system eliminates the passive consumption that during the storage of the machines would discharge the batteries.

The mudguards are made of a robust steel sheet, covered by an second aluminum anti-slip plate. This mudguard will not rust and allows the operator to climb over it for all maintenance operations needed on the upper part of the machine. The wheels are fitted with anti-screwing warning plates and on the trailers metal wedges will block the wheels when on a slope, or at any stationing stage.

Finally, it is possible to access the commands to activate the engine water heaters and the diesel tank directly from the control panel, to make the tower stay functional even in the coldest environments.